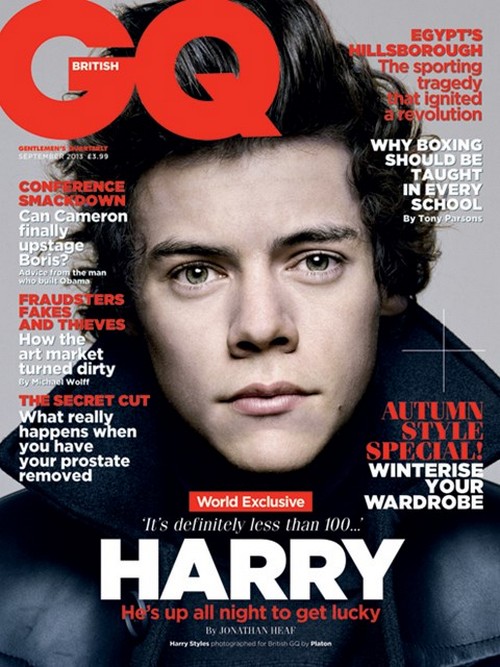 One of the things I love best about One Direction is that they are very open about their sexuality. They are friendly and touchy feely with each other, and there’s no stigma associated with being bisexual or gay, unlike the olden days of the Boy band era [a.k.a. the days of Backstreet Boys and N’Sync].

Anyway, Harry Styles covers the latest issue of GQ UK and he explains that he’s ‘pretty sure’ that he’s not bisexual, despite the many, many, many rumors surrounding him and his One Direction mates.

When he’s first told of the rumors between him and popular UK radio host Nick Grimshaw, he says, “Oh, really? I didn’t even know. We’re not dating, no. We’re just friends.” And then, when he’s asked about being bisexual, he replies, “Bisexual? Me? I don’t think so. I’m pretty sure I’m not.”

In the end, Harry admits that he doesn’t want to keep addressing rumors on Twitter, and as long as they’re not harmful to anybody, he doesn’t mind them. Future boy band members: this is how to be self-aware and diplomatic without coming off as an asshole.
What do you guys think about Harry’s interview? For what it’s worth, I think he’s telling the truth. Do you guys agree? Let us know in the comments.