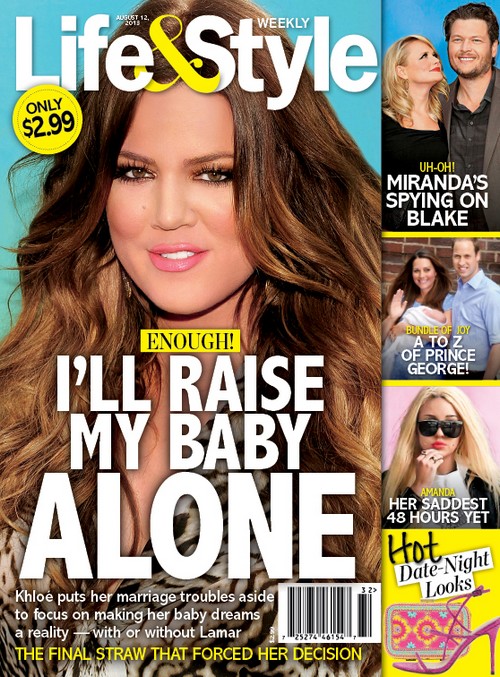 Life & Style Magazine has come out with a cover story of Khloe Kardashian. In it according to the magazine, Khloe expressed the desire to continue trying for a baby with or without Lamar. Preferable without him, especially after another mistress came out with her story.   This was the final straw that forced her decision.  As many know, Khloe has been trying for a baby since day one of her marriage 4 years ago.

Lamar on the other hand, already has kids from a previous relationship. That could be why he never thought it would hurt Khloe the way it did, after one of his side pieces admitted to trying for a baby with Lamar. Either way the insensitive jerk in no longer needed in the baby making department.

She wants to have her baby herself and if that means new exercises and total diet overhaul then that’s what she’s going to do and I’m glad for her. She really wants a baby and despite earlier rumors it wasn’t because she wanted to compete with Lamar’s ex.  Some women don’t need to stay in unhappy relationship in order to raise a baby. (I’m looking at you Kourtney). They’re strong enough to do it on their own. If this whole cheating scandal did anything positive then it would be helping Khloe leave Lamar and stand on her own.