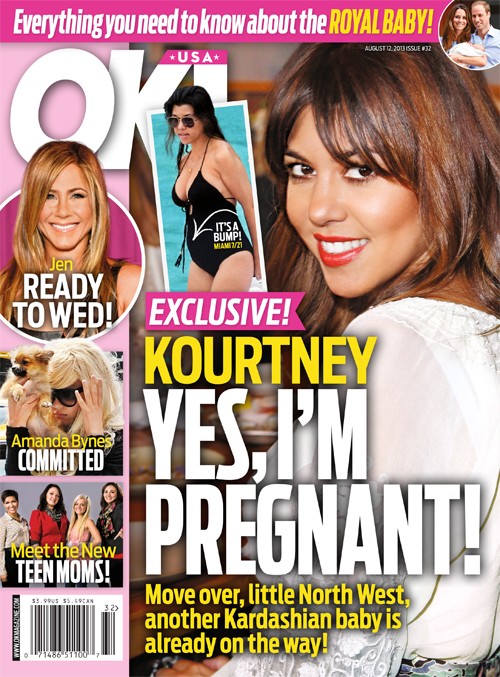 The current issue of OK! Magazine features the cover story “Kourtney, Yes I’m Pregnant Again.”  The magazine is claiming that Kourtney Kardashian and Scott Disick are expecting their third child together.  WOWSER!  They even have a picture of her baby bump on the cover.

In November 2012 the same magazine claimed that Kourtney was trying for a third child, they went on to claim that Kourtney was addicted to being pregnant.  “It’s at the point where Kourtney is almost addicted to being pregnant. It really does change her outlook on life. Her mood, her attitude, and her temperament really change and she loves that feeling so much that she wants to keep the pregnancy high going.”

Word on the street is that Kourtney was jealous of her sister Kim Kardashian and all the attention her partner Scott and the rest of the world showed her.  So Kourtney decided to do something about it and as the magazine says, “Move Over, little North West another Kardashian baby is already on the way!”

It would not surprise me if Kourtney was pregnant she said in an interview she was not using birth control anymore,  “I need to see what it’s like when I have two, but [having kids] is what life is about.  I’m not going on the pill [after giving birth to Penelope]. I don’t believe in it anymore!”

So what do you think Hiccupers is Kourtney pregnant with Baby # 3?  Hit the comments and let us know your thoughts!