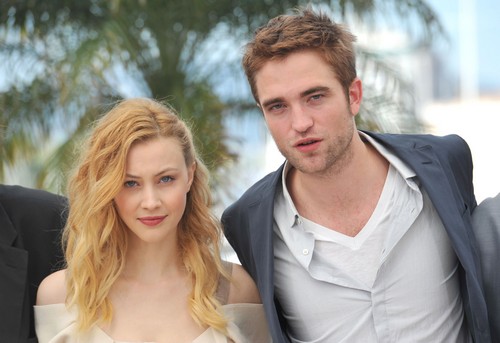 Why are tabloids so desperate to make the Robert Pattinson and Sarah Gadon romance happen? I mean, they tried to make it happen when Rob and Sarah were filming ‘Cosmopolis’, even though he was still with Kristen Stewart at the time. And now, they’re trying even harder to make it happen since Rob is single and he and Sarah are filming ‘Maps to the Stars’.

However, we saw Rob kissing a random woman in Toronto last week. That girl was definitely not Sarah or Riley Keough, the two women that Rob’s consistently been linked with over the last few weeks. It’s not clear if Rob is dating that girl, and we don’t even know who that girl is, so it could have just been a hookup. Regardless, OK! Magazine is still going for the Rob and Sarah romance, with a new report about how they’re growing closer on the set.

A ‘source’ explains, “There’s a real spark between them, and they’ve already been spending time together when filming ends for the day. She seems to be wooing him by treating him mean. The approach appears to be paying off for the stunning blonde, as the pair has been spending a lot of time alone together, on and off set.”

What do you guys think? Is there something to this, or are the tabs just getting desperate? Let us know your thoughts in the comments.