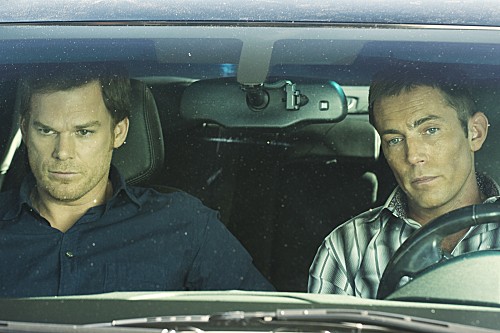 Our favorite serial killer Dexter returns to Showtime tonight with a whole new episode.  On last week’s show Yates came after Dr. Vogel and kidnapped her.  Yates was totally pissed he knew Dr. Vogel sent Dexter after him.  Dexter and Deb tred to keep her safe. Deb and Dexter got therapy from Dr. Vogel.  Dr. Vogel questioned Deb about trying to kill Dexter and herself.

Her explanation she found out their Dad killed himself because of Dexter.  Finding out about her Dad committing suicide traumatized her.  Dexter was not impressed.  If you missed it we have a full and detailed review, right here. So head over to get caught up before tonight’s episode.

On tonight’s episode  Hannah is back and you know that is not going to be good.  Also Mr. Hamilton’s son, Zack who Quinn suspected killed Norma is back at it and he is on Dexter’s radar.  Dexter realizes the young Hamilton is drawn to blood like him and hopes if he follows him he will discover the truth.  The picture gets a little murkier when Dexter realizes that Zack is a patient of Dr. Vogel.  More reasons I don’t trust that women.  Dexter confronts Vogel about Zack.  Vogel wants Dexter to teach Zack Harry’s code.  Dexter is shocked!

I wonder what that is going to mean for Dr. Vogel and Dexter’s relationship.  Dr. Vogel is not one to give up when she wants something.

Tonight’s episode is going to be another action packed one, which you won’t want to miss, we are down to the last episodes.  So be sure to tune in for our live coverage of Showtimes’s Dexter Season 8 episode 6 — tonight at 9PM EST!