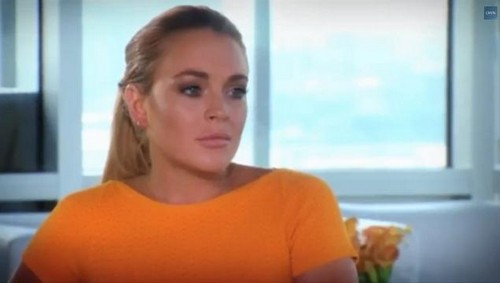 I have to wonder if at this point even Lindsay Lohan is sick of herself. It has been 7 years since she was in a movie that showed off her acting chops and made people think that she was a Hollywood whizkid. Instead she is now far more famous for her heavy boozing, drugging and jailhouse stints than she is for anything else. Lindsay was released from a 90 day rehab program last week and according to those close to her she’s at least trying to do this the right way. She has asked that all alcohol be removed from her vicinity so that she’s not tempted to fall off the wagon.

Tonight we’ll see her hosting Chelsea Lately and on Aug. 18th Lindsay’s interview with Oprah Winfrey will be televised.  A 16 minute clip of that has been released and while we don’t hear Lindsay’s responses we do know that Oprah isn’t holding back from answering the hard questions.  We see her ask Lindsay straight out whether or not she’s an addict  and what it’s like to be an adjective and adverb for a child star gone wrong.

My guess is that she didn’t quite understand that last question much but it’s true. References to her are never really good and she is always the one that the current crop of teens in Hollywood is warned about becoming like. That has to be a bit hard to swallow don’t you think?  Oprah may be asking all of the tough questions but do you think that Lindsay is answering them?  In the past we have seen her admit a little, own a bit and then now want to discuss the rest and usually the rest is what matters most.

Will this interview be more of the same? Tell your thoughts in the comments below!