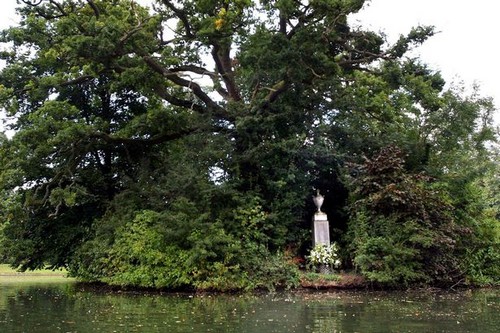 While the birth of Prince George Alexander Louis brought with it an over abundance of joy there was one obvious sad point- the fact that Princess Diana was unable to share in the joy.  Prince William’s mother died in a tragic car accident 16 years ago and it’s a loss that he still feels on a daily basis.  The birth of his son brought with it a mixed bag of feelings and so once Kate Middleton was comfortable with baby George at the Middleton’s mansion, Wills decide to pay his mother a visit.

According to the Aug. 12th print edition of Globe magazine William make the 70 mile trip with a body guard to Althorp where Diana is buried on an island in the middle of a lake.  There is always a rowboat waiting for William to travel out to The Oval  and a chair has been placed near his mother’s grave so that he can stay for as long as he likes.On this visit William brought a single pink rose and a photo of Prince George. He left it there so that Diana was formally introduced to her first grandchild. It kills William that his loving mother will never hold his son so placing those photo with her was as close as he could get to it. While there he tearfully promised to bring George back to meet her as soon as he is big enough to make the trip.

It was a tearful trip that William absolutely needed to make. It killed him to allow Camilla Parker Bowles near his son when his own mother couldn’t be there so he had to do something quickly. He also promised that George will be raised in as normal an environment as possible. Do you think that Diana would be proud of the man that William has grown into? Tell us your thoughts in the comments below!