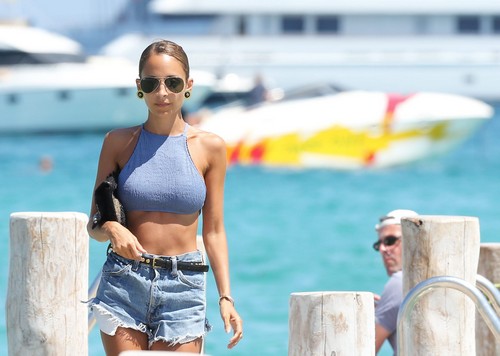 Forget about how great Nicole Richie tells you that her life is, she’s one of those celebs whose weight tells the real story. When she is happy she is also healthy. Nicole will never be a big girl but for years she appeared to have beat back her personal demons and was enjoying life with her family and as a successful business woman. Recently it appears that Nicole is having some problems again.

According to the Aug. 12th print edition of Star magazine Nicole’s weight may have recently plummeted to as low as 88 pounds. She was photographed on a recent European vacation with hubby, Joel Madden and their kids, looking pin thin again. Sources close to Nicole say that she of course says that she’s fine and picks at food throughout the day, but never sits to eat a meal. Anyone with eyes can see that she’s struggling and supposedly Nicole has very low energy and there are indications that her immune system is being compromised.

So what is triggering Nicole’s recent backsliding? There have been rumblings in recent months that her marriage to Joel is on the rocks. Their careers have kept them apart a lot this past year and when they are together they clash. He has been rumored to be dabbling in drugs again which is another thing that Nicole needs to steer clear of. It’s hard for a former addict to be close to someone that is even smoking weed because a slip could easily happen.

A strained marriage, the fight to stay clean and then the everyday stress of kids and work appears to be wrecking havoc on Nicole.

Do you think her food issues are flaring again judging from the recent photos? Tell us your thoughts in the comments below!