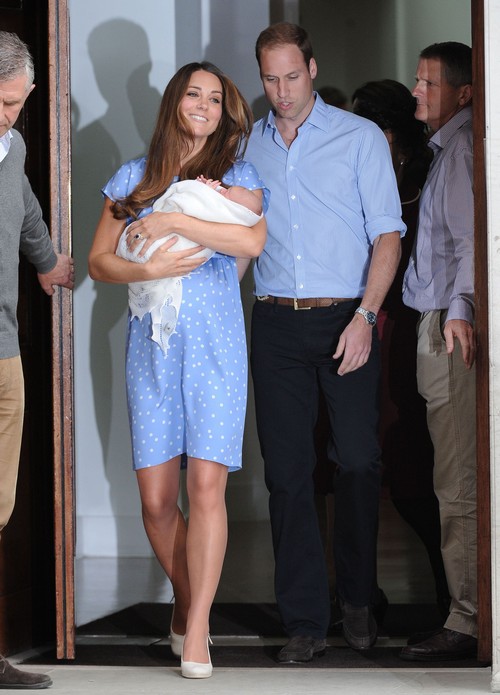 One of the things that I love the most about Kate Middleton and Prince William is that not only do they say that they want to be a normal couple, but then they take the steps to make it really happen. Rather than have nearly two week old Prince Georgie under lock and key behind palace walls he is instead living freely in the Middleton’s family home in Berkshire.

According to the Aug. 12th print edition of Star magazine both Kate and William are insisting on being completely hands on with their son just as any other first time parents would be. Kate is the boss and Wills does whatever she needs to make things easier for her and the baby. Queen Elizabeth did give the couple one of her top housemaids to help with chores but when it comes to the baby there is no nurse or nanny in place.William has taken two weeks off to bond with his son and supposedly he is more than a bit of a fusspot worrying about every little thing. Carole Middleton, Kate’s mom has joked that William needs to return to work soon so that Kate can chill out a bit. One nervous parent can be tough to deal with whether you are royal or not!

Kate and William have managed to really put a modern twist on their marriage over the last few years. They follow through on royal obligations and then go off and walk the dog or grocery shop. Expect them to embrace a similar parenting style. Look for George’s life to be kept as absolutely normal as possible given the situation. Do you think it was smart for the new family to leave the royal compound to bond in peace? Tell us your thoughts in the comments below!