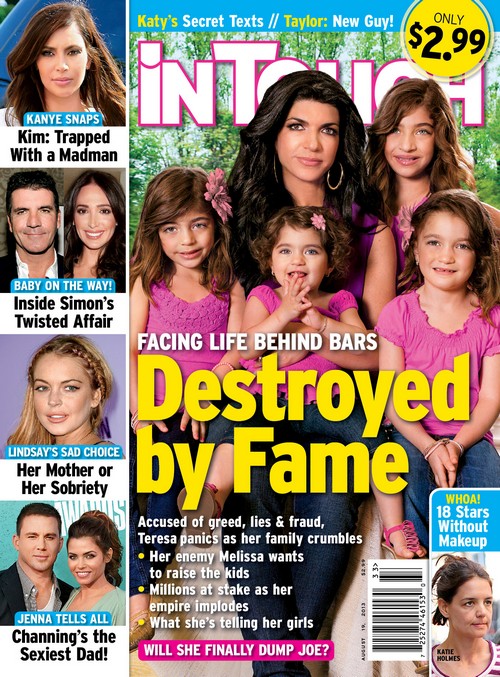 The current issue of In Touch Magazine features the cover story “Teresa Giudice Destroyed By Fame.”  Teresa Giudice and her husband Joe Giudice are currently in big trouble with the law.  The couple have been charged with a long list of charges, including major bank fraud and tax evasion, and are now facing upwards of fifty years in the jail.

This week IT is claiming the reason Teresa is facing a life behind bars is because of fame.  They have all the details of what Teresa told her family about the lies and what she is telling her friends.  If Teresa gets sent to the slammer the magazine claims that Teresa’s bitter enemy Melissa Gorga is ready to step up and take her children.  Can you imagine what Teresa would think about that?

Meanwhile while Teresa’s empire implodes her family lawyer Miles Feinstein claims both she and juicy Joe will plead not-guilty to all the charges.

The arraignment is set for August 14th and Teresa is confident things will work out so she has planned a book signing of her Fabulicious!: On the Grill cookbook.  The signing will be held at her co-star Kim DePaola‘s boutique Posche.

Kim tells In Touch,  Teresa “easily could have canceled.  She wouldn’t have backed out of this no matter what. She’s a hard worker and wouldn’t disappoint her fans.  “Posche is a place Teresa is comfortable in.  She feels safe because it’s at my store.”

What do you think will Teresa escape these charges?  Will she divorce Juicy Joe?  Hit the comments and let us know your thought!