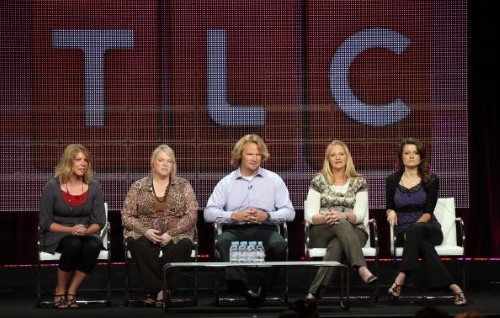 If you’ve tuned in to TLC’s Sister Wives then you know that Kody Brown is a polygamist that shares his life with 4 wives on camera. Meri Brown is in fact Kody’s only legal wife and she has stayed in this crazy relationship with him for 17 years now. That’s close to two decades of watching her husband knock up other women while pressuring her to start fertility treatments to have another child. The message is loud and clear that she is simply not enough or good enough for Kody, yet Meri still is invested in the relationship.

According to the Aug. 19th print edition of Globe Magazine, she admits to being jealous of her husband’s intimacy with his other wives. She claims that jealousy is a natural emotion and that the bigger issue is how to look past it to see the good.  Wait a minute here.  It’s obvious that this extended family arrangement was certainly not her idea and Meri is the most disgruntled of the group. She also obviously resents the fact that Kody added a fourth, younger, prettier and skinnier wife.  Meri even tried to tell Kody how it makes her feel to see him with his new wife Robyn, but he refused to listen to his real wife.

Ironically, when Kody was asked if it would be okay for any of his wives to take a second husband he was absolutely repulsed by the idea. Talk about a nifty double standard!  Meri can’t be playing with a full deck here. She chooses to stay in this relationship that obviously makes her feel horrible about herself and then lets television cameras capture her misery for the whole world to see. Then when questioned she claims that the jealousy is normal- yet the situation is not! Will Meri be the first Sister Wife to hit the bricks? Tell us your thoughts in the comments below!