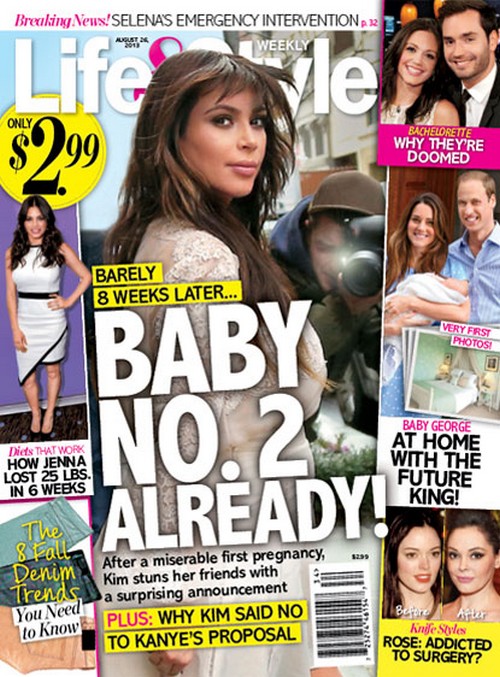 The current issue of Life & Style magazine features the cover story, “Kim Kardashian Baby No.2 Already.”  The magazine claims Keeping Up with The Kardashian‘s star Kim Kardashian had a miserable first pregnancy.  Could be because her baby daddy, Kanye West was no where to be seen, just saying…  They go on to claim that she has managed to forget her misery and start on baby no. 2 already with her Knight In Shining Armour.

So in the midst of all the Kanye cheating rumors galore Kim has decide to get pregnant again, I highly doubt that.  But maybe the rocket scientist thinks that getting pregnant again will keep Kanye by her side.  Bad plan Kimmie!

According to L & S, “Just eight weeks after giving birth to daughter, North West, Kim Kardashian is already telling friends and family that she wants to have a second child. Life & Style has all of the crazy details behind Kim’s plans.”

So Kim is trying for baby number 2 but Kim has turned down Kanye’s wedding proposal in spite of us hearing how desperate she had been to get hitched to the rapper. hmmm…  Maybe she is playing hard to get …

What do you think Hiccuppers?  Can you take another Kim K pregnancy????  I know I can’t,  I am hoping Kim stays hidden for good 🙂