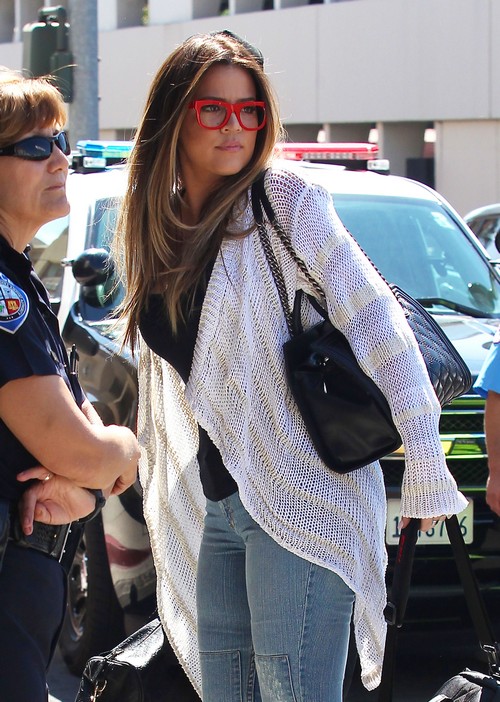 X17 reports that Khloe Kardashian has kicked Lamar Odom out of their home, and he’s reportedly staying at a hotel right now. The outlet spotted Lamar’s car at the hotel overnight, and Khloe was also seen visiting him, looking ‘sick and tired’.

Well, endless cheating rumors and breakup rumors about your relationship can do that to a person. Anyway, the speculation has ramped up in the wake of this latest report. When Kris Jenner shut down the rumors yesterday, everyone thought that would be the end of the rumors. After all, she pretty definitively stated that Khloe and Lamar were just fine, and they were at her house a couple of days ago.

But now, legitimate outlets are reporting that they are not fine, and that Khloe and Lamar aren’t even living together. Correct me if I’m wrong, but couples not living together is never a positive sign for their relationship.

There are also other reports stating that Khloe was visiting Lamar at the hotel after he begged her to give him another chance, although we don’t know if that’s true or not. It’s certainly possible, but without more details on the status of their relationship, we don’t exactly have a lot to go on. All we know is that the cheating allegations have been spreading for the past month, and some outlets reported that Khloe and Lamar were on the verge of divorce. But if she’s visiting him, that means she’s at least willing to talk with him. Whether that ‘talk’ was to discuss their separation or reconciliation, it’s hard to say.

What do you guys think of Khloe visiting Lamar at a hotel, and reportedly kicking him out of their house? Do you think they will end up reconciling or breaking up? Let us know your thoughts in the comments.