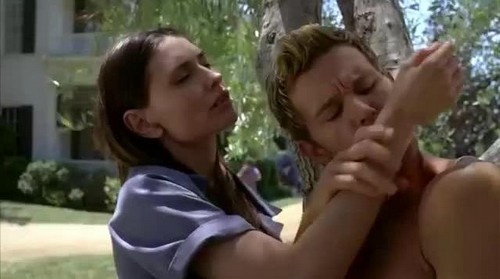 Sit back Truebies and enjoy, tonight season 6 of True Blood comes crashing to its final episode.  On last week’s show Bill tried to ferry Warlow away from the faerie plain, but Sookie was having none of it. Sookie felt Warlow was too week after being almost drained by Eric.  Meanwhile, Eric arrived at the vamp camp, looking to inflict serious human damage.

Meanwhile, in Bon Temps, friends and family took emotional turns remembering Terry, it was a real tear jerker and I went through several tissues. Bill felt the pull of Lilith’s sirens, but Jessica and James saved him.  Did you watch last week’s fabulous episode? If you missed it we did a recap of the episode HERE. So head over there and you can get caught up before tonight’s episode airs.

On tonight’s show Jason is feeling an attraction to a vampire and we know Violet sticks around for another season so it has to be her.  Sookie is going to have to make a decision about Warlow, he survived Eric almost sucking all his blood out of him – so now she has to decided whether she will keep her word and be his faerie vampire.  A new crisis hits Bon Temps as the vampires infected by Hep V are on the march.