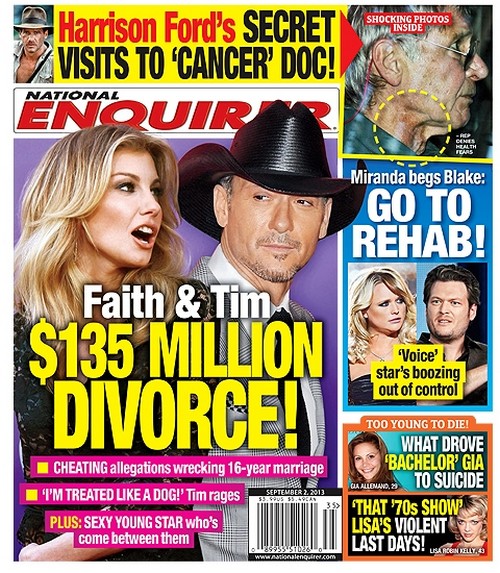 The current issue of National Enquirer has the bombshell story “Faith & Tim – $135 Million Divorce.”  The magazine claims that Faith Hill and Tim McGraw‘s marriage is done, “the couple’s life has turned into a battlefield, and now Tim is threatening to walk for good.”

The National Enquirer claims they have managed to uncover cheating allegations that are wrecking their 16-year marriage.  With celebrities these days nothing would surprise me BUT, the celeb that Tim is suppose to have this great sexual chemistry with is Taylor Swift.  Okay hold the phone, Taylor has the sexual aura of a tree – so I am calling Bull on this detail.  I was ready to maybe believe it until I saw who they said is the , “Sexy young Star” that has come between them.  Taylor Swift = sexy – NO WAY!

Nevertheless, NE ignores the obvious and goes on to say that Faith is not treating her man right and he raged, “I’m Treated Like A Dog!”  Their source has, “uncovered the sensational details of the conflict that’s left the superstar couple’s marriage and their $135 million empire hanging by a thread.”

Someone should give NE a reality check and let them know just because they want it to be true does not mean it is.  What say you Hiccuppers is this story just groundless speculation to sell magazines?  Hit the comments and let us know your thoughts!