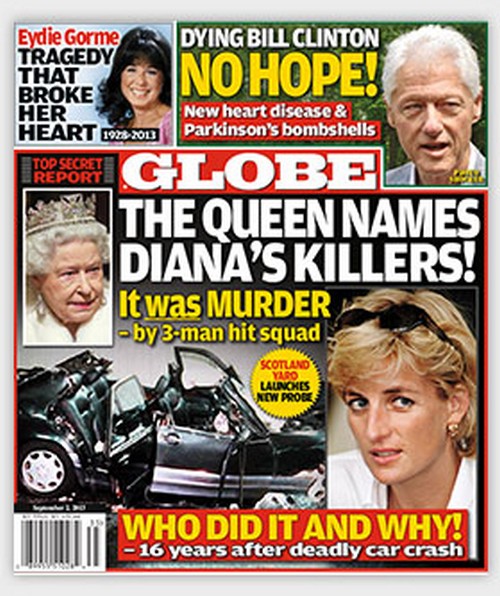 The current issue of Globe Magazine features the cover story, “The Queen names Diana’s Killers!”  The magazine claims that after a long 16-years the killers of Princess Diana have been found.

According to Globe, “As Scotland Yard launches a new investigation into Princess Diana’s death, Queen Elizabeth has finally come clean about what she knows about Di’s tragic car crash 16 years ago. It was MURDER!! – by a three man hit squad! Grab this issue of GLOBE and find out even more – including the shocking identity of the killers and why beloved Diana was targeted for death!”

Both Diana’s chef and butler have both stated that in the months leading up to her death she was growing increasingly paranoid about what she believed was a plot to kill her.  So maybe Diana was right.  We have also heard that Queen Elizabeth wants to place Prince William on the throne next, bypassing her son Charles.  Maybe he had his hand in the hmm accident…

What say you Hiccupers, was Princess Diana murdered or was it just a horrible tragedy?  Hit the comments and let us know your thoughts.