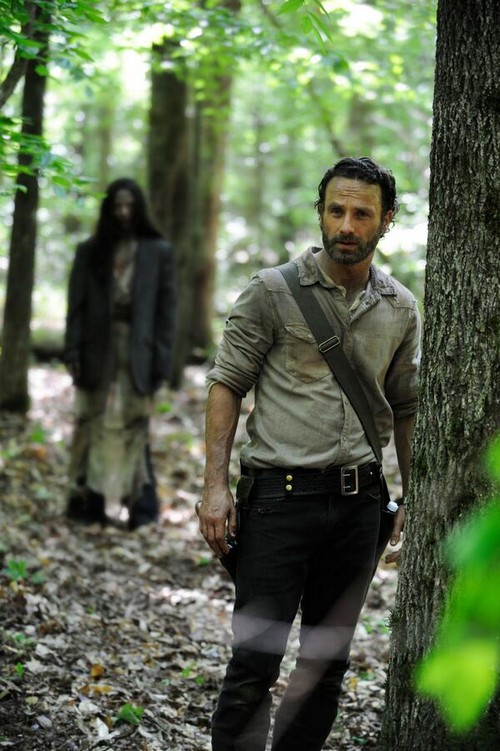 Are all of you going through The Walking Dead withdrawal like me?  I cannot wait until it comes back with all its gory goodness and I have been reading every single Season 4 spoiler I can get my hands on.  Now executive Producer David Alpert has revealed plenty in an interview with AMC.  See some highlights from the interview below:

If Season 3 was about the human threat, what would you say Season 4 will be about?

What we really have here in Season 4 is we dangle the carrot that civilization can be rebuilt… The notion that there’s civilization and the notion that there’s the possibility of there being laws and a sense of normalcy. I think we’re going to see an evolution in the walkers — there’s a whole bunch of new walkers — and we’ll see an evolution of the threat of human-on-human. Dangling the possibility of civilization will make people much more desperate and willing to do things that would have previously been unthinkable.

What’s been the toughest character for you personally to lose from the show?

The great thing about this show is that literally every character is on the table… We have no one that is untouchable… One of the hardest things was killing Shane. In the comic, it happened much, much earlier, and Robert had said he wanted to give that character a little bit more space to breathe. So trying to figure out what was the right place to kill Shane was really difficult… In the screening room here in production, there’s a wall that says “Our Grateful Dead,” and it’s got pictures of all the characters who’ve been killed off over the seasons. It’s kind of insane: One, it’s kind of touching, and, two, we’ve killed a lot of people on this show. [Laughs] It’s hard to say which one was the toughest.

Are you planning to add any characters to that wall in Season 4?

Oh, there’s going to be a whole bunch of people added to the wall.

To read the rest of the interview head over to AMC, [CLICK HERE]

We have also managed to get our hands on some of the season 4 episode titles, check them out below:

Episode 1 will be titled “30 Days without and Accident”

Episode 4 will be titled “Indifference.”

Episode 6 will be titled “Rise.”

Episode 7 will be titled “Dead Weight.”

Season 4 premiere on AMC on October 13th, 2013 and make sure to come back and visit us for all the Walking Dead recaps, spoilers and information.