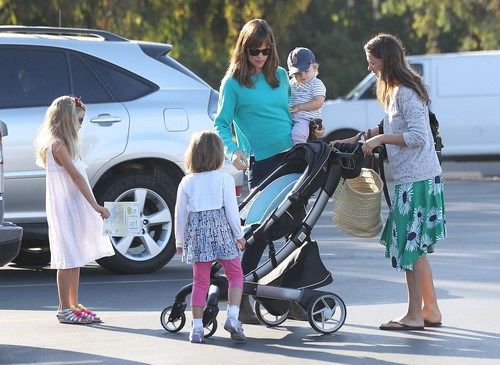 After Ben Affleck really cleaned house during last springs’ award season Jennifer Garner was thrilled for both her husband and herself. She was thrilled that all of his weeks away from home for Argo absolutely paid off and that he was getting the respect that he deserved and she was also excited for herself. Jen has spent much of the last 7 years at home with the couples three kids while Ben has chased his dreams and brought home the bacon.

According to the Sept. 2nd print edition of Star magazine Jen was really hoping that Ben would stay home for awhile and play Mr. Mom so that she can go back and pursue the career that was once red hot. Don’t forget, when Ben and Jen first got together her career was on fire and she chose to push it aside for awhile. She still believes their might be an Oscar in her future if she is lucky enough to find the right role. Unfortunately that’ll have to wait again because as we all know, Ben has signed on to play Batman in an upcoming sequel to Man of Steel.

While there has been a ton of negative feedback about the casting from people that would normally count themselves as fans, I wonder if Jen is just as against it. At what point will Jen go from being the good wife to just plain resentful? Would you rather see Jen turn up on the big screen in just about anything rather than have Ben crack out the cape and tights? What kind of effect do you think this will have on their marriage? Tell us your thoughts in the comments below!