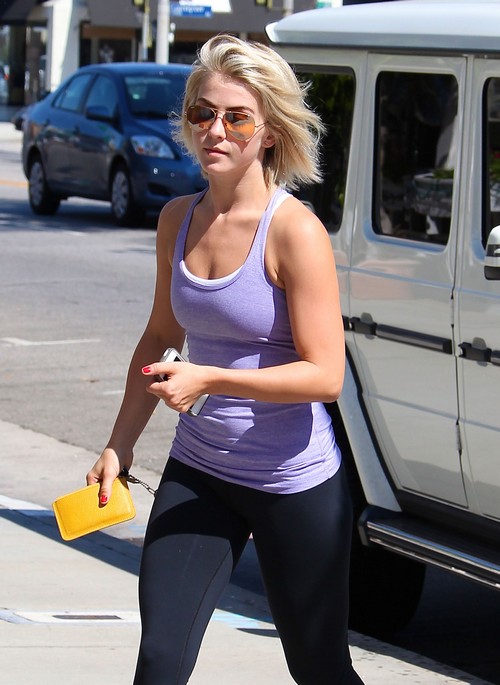 After Julianne Hough split from longtime boyfriend Ryan Seacrest last March she was smart and took some time to just hang with friends and breathe a little. I think we all kind of figured that it wouldn’t be too long before she turned up somewhere with a new guy on her arm though. Sure enough back in mid July Jules was spotted out putting on a PDA infused show over dinner with Ari Sandel, yet another guy who is considerably older. Things were rumored to be heating up between the two, for a few weeks anyway.

The two were spotted out together at Palihouse in West Hollywood last week but as soon as they made it through the front door Ari seemed to ditch his date. Jules hung out with friends while he flirted up a storm with other women and insisted that he is indeed available because he and Jules aren’t an item! I have to wonder if she was aware of the fact that they aren’t actually together! Usually even if things aren’t exclusive you’re not out with the other person scoping for something better!A lot can happen in a week, do you think that Ari and Jules are even still casually seeing each other or is that whole situation over with? Better yet, do you think that she is even in the market for something serious right now? Maybe Jules is the one who wanted to keep it friendly rather than jump into another relationship so quickly! Who do you think would be a good match for Jules? Tell us your tghoughts in the comments below!