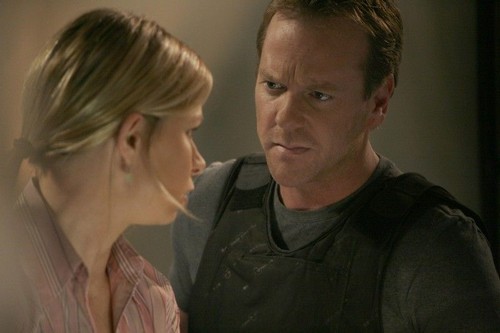 When 24- Live Another Day, Foxes reboot of the hit series 24 pops up on television screens across the country in spring of 2014 Kiefer Sutherland‘s Jack Bauer won’t be the only familiar character. Chloe O’Brian played by Mary Lynn Rajskub will also be knee deep in the mix. As it turns out Fox and Imagine Entertainment were both more than happy to do the show with Kiefer as the only actor returning from the popular series but he was having none of that,.

According to the Sept. 2nd print edition of National Enquirer Kiefer fought tooth and nail to have Mary Lynn’s character brought back, not because they are super close friends, but because he knows that 24 fans absolutely adore Chloe. What Kiefer did do is secure a 100% raise for Mary Lynn which is absolutely crazy. Can you imagine how much she’ll be earning for the shows limited run? Crazy money  but the network agreed that she’s worth it. If they hadn’t brought her back Kiefer was planning on walking away from the idea of a reboot altogether! I guess when he put it that way they kind of had to agree to the raise.Were you one of the millions of diehard 24 fans that was left hanging when it went off the air? This reboot is something that everyone has hoped would really happen. Are you thrilled that not only Jack but also Chloe will be revived in just a few short months? The show is intended to do a three month run but do you think there’s a chance that they’ll maybe extend it if the numbers are high enough? Is there any hopew of Jack Bauer returning to television longterm? Tell us your thoughts in the comments below!