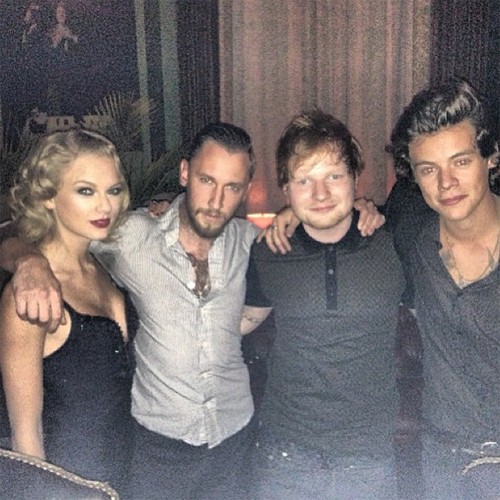 Either Harry Styles is really the chilliest guy ever, or Taylor Swift actually didn’t diss Harry during her VMA performance.

Although many people claim that Taylor mouthed to One Direction to ‘shut the f*** up’ when they were on-stage, it has yet to be proven because there’s no audio to go along with the video. And then, people also called Taylor out for dissing Harry when she dedicated ‘I Knew You Were Trouble’ to someone in the audience, and the fans immediately assumed that was Harry. However, that song was written before she and Harry broke up, so it can’t be him.

Either way, it’s clear Harry didn’t care because he and Taylor actually hung out at the VMA after party that Robin Thicke hosted, and took a picture together with mutual friend Ed Sheeran. Not only that, but when Harry was asked about that picture at the 1D New York premiere of their new movie earlier today, he revealed that he and Taylor went to dinner with some friends and ordered mocktails, saying, “We went for dinner. I had a mocktail.”

Looks like Harry lives in the forgive and forget land, which is more than we can say for Taylor.

To find out why Taylor Swift is like a 13 year old, head over to The Gossip Wrap-Up!  [CLICK HERE]