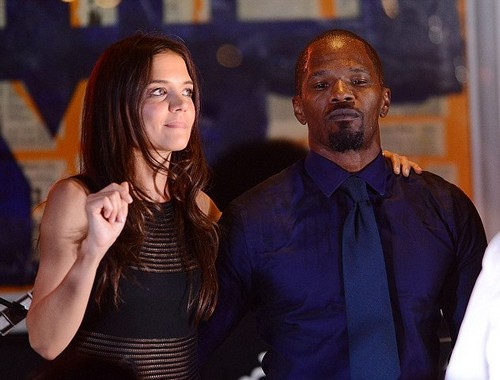 Nothing about the relationship between Katie and Jamie has been confirmed yet, many people believe that there’s nothing going on with the two of them; they’ve been mentioned to being old friends.  The whole thing went down at the Apollo in the Hamptons  and it could have been Katie and Jamie catching up with each other.  They may want to start to hang-out with each other more and become friends again, though the possibility of them being in relationship or ending up in one can’t be completely ruled out as of now.

During the event someone overheard Katie Holmes saying “I haven’t had such a good time in so long.” You can see that she enjoyed herself during the event, from divorcing Tom Cruise to getting with Jamie Foxx; this girl really knows how to get with guys who are amazing actors.

What’s your opinion on the matter, Is Katie Holmes and Jamie Foxx together, or are they just old friends catching up?