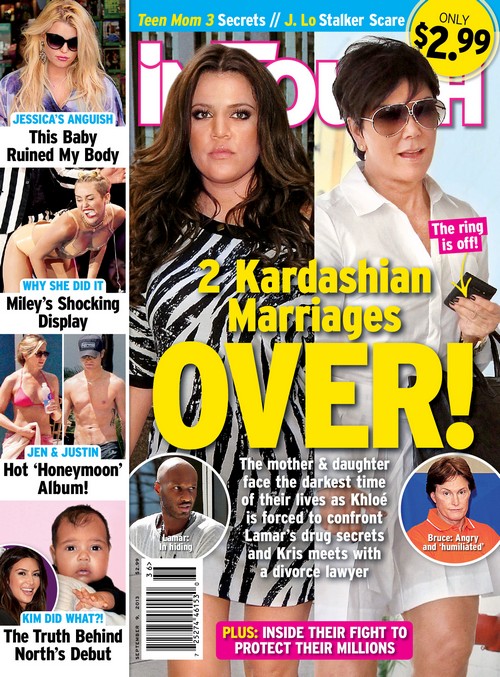 The current issue of In Touch magazine features the cover story “2 Kardashian Marriages Over.”  Obviously because of Labor day around the corner, the magazine has decided to go with Khloe Kardashian and Lamar marriage story that has been everywhere all week.  They have also decided to recycle an old story they have used many times in the past – Kris Jenner and Bruce Jenner divorcing.  I almost feel like I should pick up the phone and call Kris and say, “Yo Kris Divorce Already..the tabs want it.”

So on to their claims, this time IT claims a family friend has revealed, “they’ve had problems for a long time and have been separated for months” and Quelle Horreur, she was gasp….. photographed without her huge rock!  “There were also promo photos for her talk show [Kris] that she wouldn’t approve because she realized she wasn’t wearing her ring in them.  She made sure they never saw the light of day.”

Not one to stop there, the magazine goes on to claim that Kris and Bruce have not slept together in years.  Apparently Kris and Bruce’s relationship is all for the reality TV camera’s now, quelle surprise….

If you must find out more about this story, pick up the current issue of In Touch on stands now!