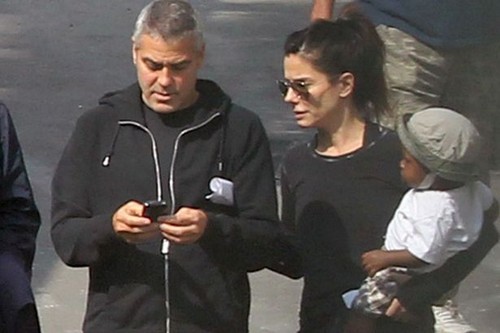 Who doesn’t want George Clooney to get together with Sandra Bullock? Age appropriate and gorgeous, they would make quite the power couple. However, I don’t think George would ever date someone with kids, and besides, they are apparently too close as friends to ever think of themselves in the romantic capacity.

There were reports published after the Gravity photocall that George was giving ‘eyes’ to Sandra Bullock, even though all I saw in the pictures were two friends laughing at the photographers. Sandra also feel the same way, because she denied any rumors of a romance, explaining, “He was not making eyes. Maybe cross-eyes, but that is about the extent of his [googly] eyes.”

See? Funny and smart, she’d make a great match for George. But alas, I don’t think it’s going to happen. We can comfort ourselves by setting Sandra up with imaginary matches all over Hollywood. She once dated Ryan Gosling, so we know her standards are high and she’s not against dating younger men.