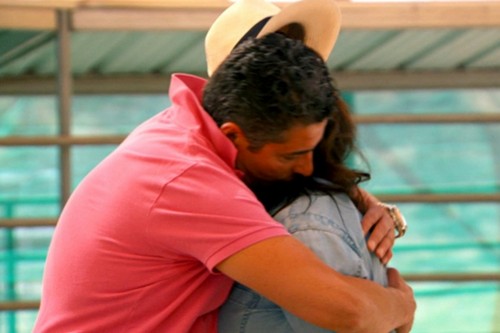 The Real Housewives of New Jersey returns to Bravo tonight with new episode called, “Horse Whisper to a Scream.”   On last week’s show there’s was no taking the Jersey out of the crew as the Housewives jetted off to the zen Arizona desert to celebrate Melissa’s birthday. But mounting doubts forced Joe to rethink including his sister, Teresa, on the trip.

As Jacqueline faced a major hurdle in mending her relationship with Teresa, Caroline struggled to get her husband, Albert, to relax. And Kathy received a long-awaited message from another realm.  . To get caught up for tonight’s crazy episode if you missed last’s week, you can read our full and detailed recap, right here.

On tonight’s show An unorthodox therapy brings the Housewives up close and personal with a horse’s hoof, opening old wounds and leaving Caroline in tears over an admission from her husband. A traditional Native American drum circle plays backdrop as Melissa and Jacqueline face their trust issues and Kathy finally takes a stand. In a shocking moment of truth, Teresa’s husband, Joe, makes a revelation about his current legal issues that leaves everyone speechless.