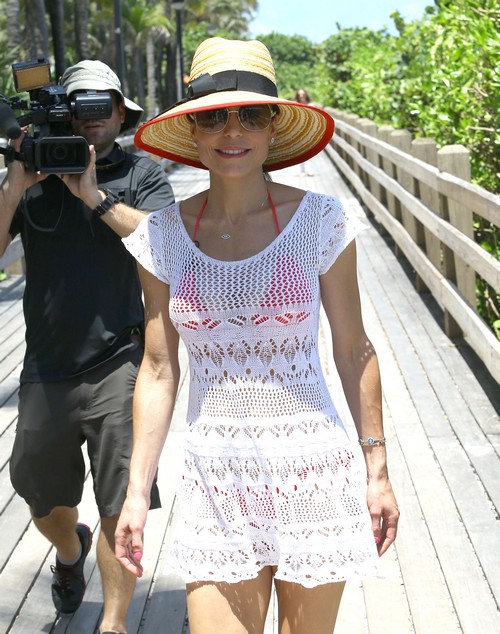 Remember last winter when Bethenny Frankel and Jason Hoppy first announced their split they claimed that they fully intended to keep things civil for the sake of their daughter Bryn? How long did that notion last, maybe two weeks and then the fighting started! Here we are 8 months later and the battle lines of this divorce war have clearly been drawn. They still live together because neither will willingly move out of their uber expensive penthouse and Bethenny uses a big lock on her bedroom door to get peace.

Jason has also refused to take his wedding ring off, probably because he knows that it bothers Bethenny when she sees it on his finger. They are both gunning for sole custody and it’s anybody’s guess who will actually win. Bethenny is very close to Bryn but Jason is a great dad and has more time on his hands to devote to the 3-year old. It’s all just very messy and at this point according to the Sept. 9th print edition of Life & Style Bethenny told her talk shows studio audience that she’s not even dating.Apparently the divorce has left a really bad taste in Bethenny’s mouth for men in general and she insists that it’ll be years before she’s even interested in dating anyone again. Her life is a combination of work and Bryn and she’s absolutely fine with that.  In the meantime she’s stuck in divorce court with no end in sight. Do you think that she and Jason will reach a point where they are sick of fighting and just come to terms out of court or is it going to take a judge’s ruling to settle this mess once and for all? Tell us your thoughts in the comments below!