The Walking Dead Season 4 SPOILER – Prepare For A New Romance 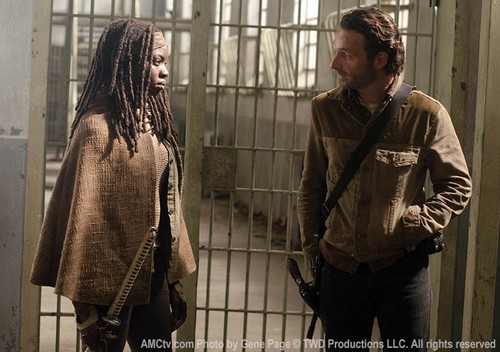 There’s some great news for those looking for romance in “The Walking Dead”. It seems zombies and numerous deaths haven’t quit ruled out the expansion of the dwindling human population.

A concerned viewer wrote in to TVLine to ask about the chemistry we’ve been feeling between Rick and Michonne. That viewer wanted confirmation it was never going to happen but they were disappointed to find out series creator Robert Kirkman left that particular door wide open.

Thanks to TvLine we know he said he “wouldn’t necessarily rule a romance out,” but he reminds us that Rick’s “wife did just die in a horrible way, so I don’t think any kind of romance is really on his radar just yet.” No rush Mr. Creator you take your time. Especially now that he has all but confirmed a romance is in the works.

“They are definitely forming a friendship,” he acknowledges. “They have a very large mutual respect for each other because of their capabilities and their ability to trust one another, and I think that’s a lot of what was growing in the Season 3 episode where they both went off on a run together.”

If the viewers aren’t mourning Rick’s wife then he shouldn’t either. However no real romance starts off that quickly.  In season 4 the bond slowly starts to grow between them.

This could interest fans –  that they will eventually turn into a powerful super couple. And until that happens all the fans will get some great footage to use in their fan fiction videos up on YouTube. It isn’t a very bad deal once you think about it.