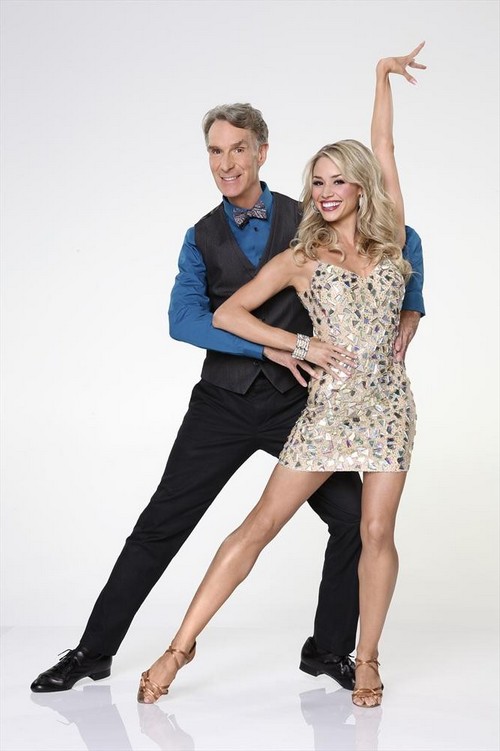 The glitz and the glamour is almost ready to head back to the ballroom for another season of DANCING WITH THE STARS.  ABC released the names of the cast for season 17 of the ever popular dance show.  One of the members of this season’s cast is mechanical engineer who wants the world to know and appreciate the passion, beauty and joy (the P, B & J) of science, Bill Nye.  Bill will be paired with professional dancer Tyne Stecklein.

If you don’t know who Bill is we have a bio below so you can familiarize yourself with her.  Also check our his first official professional photos from this season with Tyne Stecklein.

Bill Nye is a mechanical engineer who wants the world to know and appreciate the passion, beauty and joy (the P, B & J) of science. While working on 747s at Boeing, Nye entered and won a Steve Martin Look-Alike Contest in Seattle, which led to his performing as a stand-up comic. He met a few other comedians and started submitting jokes to “Almost Live,” Seattle’s own comedy show. There Nye came up with the Science Guy® character and quickly realized that he wanted to create a kids’ show about science. Eleven years later “Bill Nye the Science Guy” had won 18 Emmys. Nye won seven of them as host and head writer. These days he travels around the globe exhorting his audiences to change the world. He also has a day job as the CEO of The Planetary Society, the world’s largest non-governmental space interest organization. The Society was started by Nye’s astronomy professor at Cornell, Carl Sagan, a man who had a tremendous influence on him, deepening his respect for science and what he likes to call “our place in space.” Nye has written six children’s books and is working on a seventh about space exploration. He’s also writing a general interest book about energy. Understand energy, Nye says, and you can change the world. He was awarded the Ralph Coats Roe Medal by the American Society of Mechanical Engineers and holds honorary doctorates from Johns Hopkins, Rensselaer Polytechnic, Goucher, Quinnipiac, Willamette and Lehigh Universities.

What do you think of Bill’s casting?  Do you think he has what it takes to win the mirror ball trophy?  Hit the comments and let us know what you think!