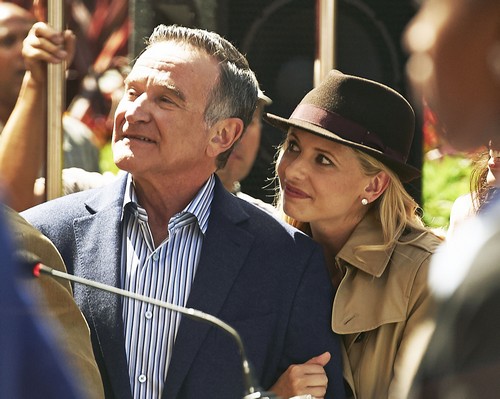 Okay, everyone has a crush of some kind, right? I mean happily married people aren’t exempt from it are they?  Nearly everyone that I know has a crush and we often hear about celebs that are drawn to others just like you and I so it really shouldn’t be too surprising to learn that Sarah Michelle Gellar can’t seem to get a guy off of her mind. According to the Sept. 16th print edition of National Enquirer, Gellar is actually working with Robin Williams in the new CBS comedy, The Crazy Ones and she can’t seem to contain her excitement.

The problem? Well, Gellar’s husband Freddie Prinze Jr. is really tired of hearing about Robin, who plays her father on the new show. Apparently Gellar can’t stop gushing about Robin and claims to really feel like his daughter. They are so tight that he even gives her parenting tips that her husband no longer cares to hear about. At one time Freddie was also working but now he is basically Mr. Mom while Gellar tests the waters with this new show. He is content to take care of their 2 young children while Gellar gets to live out her acting dream but he didn’t expect to have to share her attention with a 62-year old man!As for Robin, this show is huge for him and it’s the first time that he’ll be returning to a full time television gig since Mork & Mindy went off the air. Do you think he’ll be an asset to the CBS line up after the show final debuts on Sept. 26th?  Tell us your thoughts in the comments below!