Bethenny Frankel Opens Up About Her Struggle To Start Over 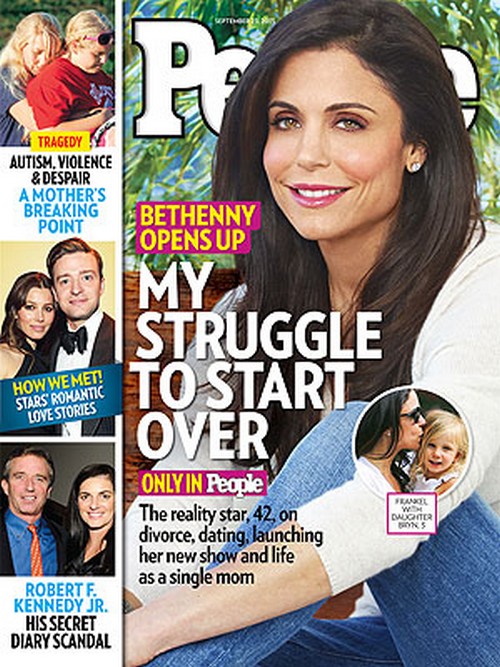 The current issue of People Magazine features the cover story, “Bethenny Opens Up – My Struggle to Start Over.”  This week the magazine has an exclusive interview with reality star Bethenny Frankel where she dishes about, divorce, dating, launching her new show and her life as a single Mom.  Bethenny married Jason Hoppy in March 2010 and gave birth to their daughter, Bryn in May 2010. It was the second marriage for Bethenny and the first for Jason.   By December 2012 the couple were separated and she filed for divorce in January 2013.

Bethenny tells the magazine that the past couple of months have been hard on her, she expected her divorce from Jason to be amicable, but it has been anything but.  Bethenny and her ex Jason have been battling it over her fortune.  Add to all this, Bethenny has been working on launching her talk show.

Bethenny also claims she is celibate now, no men for her.  “Men aren’t a priority right now – at all,” she explains.  Rather Bethenny is concentrating on being a single Mom to her five-year-old daughter Bryn.

To read more of this exclusive interview, pick up  the current issue of People magazine, on stands Friday!