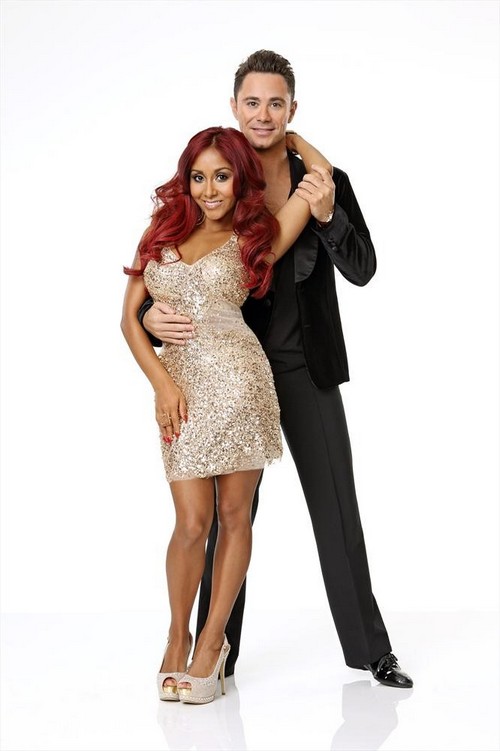 The glitz and the glamour is almost ready to head back to the ballroom for another season of DANCING WITH THE STARS.  ABC released the names of the cast for season 17 of the ever popular dance show.  One of the members of this season’s cast is reality star, Nicole “Snooki” Polizzi.  Snooki will be paired with professional dancer Sasha Farber.

If you don’t know who Snooki is we have a bio below so you can familiarize yourself with her.  Also check out her first official professional photos from this season with Sasha Farber.

Nicole “Snooki” Polizzi is a proudnew mom as well as the New York Times best-selling author of A Shore Thing, Confessions of a Guidette and Gorilla Beach. Famous for her trend-setting pouf hairstyle, small stature and acrobatic moves on the dance floor, Polizzi is the break-out star of MTV’s “Jersey Shore,” the highest-rated show in the network’s history. The third season of her current show, “Snooki & JWoww,” will debut in October 2013. She has been parodied on “Saturday Night Live” and appeared on numerous talk shows, in addition to being featured in The New York Times and on the covers of Rolling Stone, People, US Weekly and In Touch. Her constantly expanding brand includes Snooki by Nicole Polizzi, Snooki Couture, Team Snooki Boxing, Team Snooki Music in addition to an upcoming clothing line for Snooki Couture and her fourth book, Baby Bumps.

What do you think of  Snooki’s casting?  Do you think she has what it takes to win the mirror ball trophy?  Hit the comments and let us know what you think!