Nicole Kidman Knocked Over By Paparazzi In New York (VIDEO) 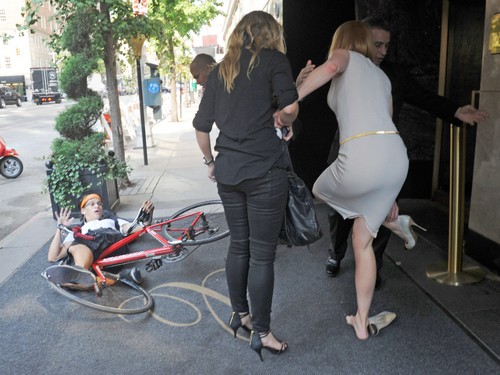 Have the paparazzi started crossing the line? I think they did that ten years ago, but they’ve become more and more brazen over the last few years. In the latest incident of paparazzi taking it too far, a photographer named Carl Wu knocked over on a bike in his bid to get close and take photos.

Although neither of them showed any visible injuries, eyewitnesses stated that Nicole sounded extremely shaken from the incident – and she apparently wanted to press charges. Unfortunately, when the cops arrived, they couldn’t do anything but give Carl a ticket because he technically didn’t break any laws – and running into Nicole was deemed an accident, and they don’t arrest people for accidents.

This is a tough situation to take sides on because you can argue from either point of view. While paparazzi are mostly despicable, I don’t think an arrest was necessary in this situation. However, there should be something put into effect that deters paps from getting so close to the celebs, and especially causing harm.

What do you guys think? Do you think Carl Wu should have been arrested, or was a fine enough of a punishment? Let us know your thoughts in the comments.