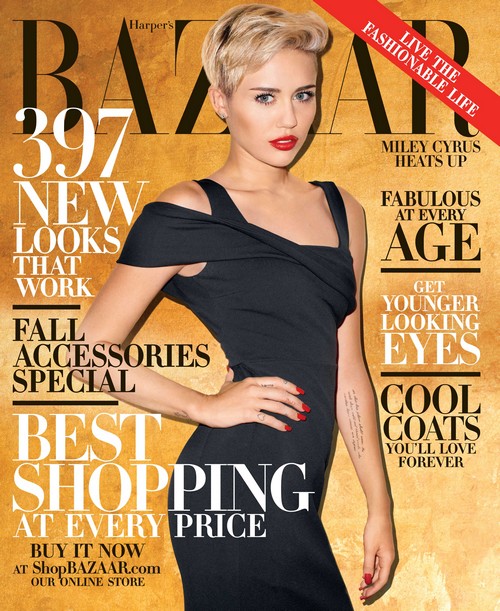 Wrecking Ball singer 20-year-old  Miley Cyrus graces the cover of Harper’s Bazaar October 2013.  The cover and photoshoot were photographed by Terry Richardson.  In the interview she offers advice to her peers like Justin Bieber and says, “I’m not saying you need to take a break because you’re crazy.  I’m saying you need to take a break so you can be crazy.”  Considering all the stunts Miley has been pulling lately, she might want to take her own advice.

A few highlights from the interview:

On her style: “I feel like every girl is trying to have a beauty shot and prove that they’re ‘fashion.’ But I can be in white leggings and a white sports bra and I’m on a whole other level of shit that those girls don’t even get yet because they don’t know how to do it.”

On her haircut: “It changed everyone else’s life more than it changed mine.”

On her wedding to Liam Hemsworth: “I definitely don’t have time to deal with a wedding right now.  But I will at some point.”