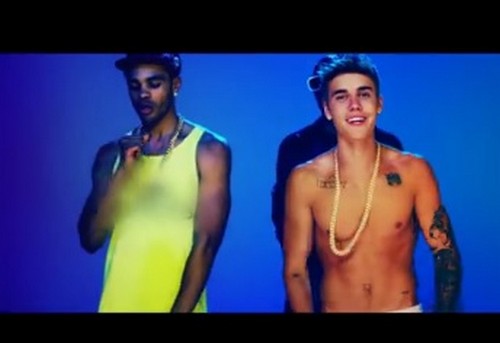 A new music video recently released called “Lolly” which is a new song by Maejor Ali and it features both Juicy J and Justin Bieber on it, instantly I already knew coming into this song that it was going to be something I’d hate.

The entire video their rapping about “Lollipops” and it’s clear that they’re not really, this song reminds me of 50 Cent’s song Candy Shop. Though there was one big difference between both songs, 50 Cent’s Candy Shop is a song that’s incredibly catchy and is easy to listen to; while Maejor Ali’s Lolly was hard to listen to.

This video alone shows you that Justin Bieber has had enough of being that innocent kid girl’s love; he now wants to take it to the next level and begin doing his own thing which involves rapping about sexual innuendos, this isn’t surprising.

The song wasn’t good to begin with, there’s no impressive wordplay that makes you go “Oh damn! Now that’s what I’m talking about” you sit there most of the time with the feeling of disgust that something like this is able to made; I don’t know what this is going to lead to, but it’s not going to be good at all.

What was your opinion on the new song Lolly? Did you somehow found it enjoyable or have the same reaction that I had?