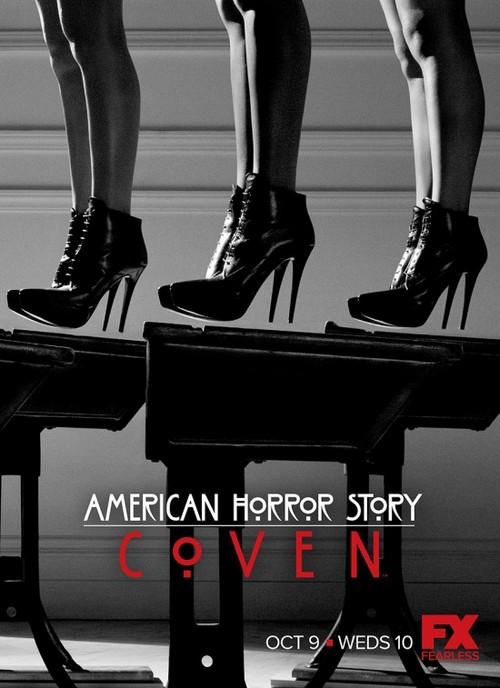 FX has decided to release teaser posters of  the upcoming American Horror Story: Coven with these four new posters, they each give you a hint of what to expect from the new season.  It looks like AHS Coven will be focusing this season’s story on the coming of age for the young witches and it’ll go into detail about how they learn to control their powers.

On the posters you can see one a woman has some sort of horn coming from her mouth, or it could be the end of snake that’s entering her mouth; then there’s a picture where it shows three women wearing high heeled boots of some sort standing on their desks.  Then there’s a poster that shows a woman who’s floating in mid-air with a bunch of gold devices of some sort impaling her in several parts of her body. The last one is the poster I like the most and that’s the poster that looks like a vintage picture.  In it we see an African American woman sitting in a chair holding what looks like a voodoo doll and underneath her there’s a snake slithering by.

It seems that this new season is going to be heavily focused on snakes, I don’t know if FX has decided that witches have snakes as their familiars or pets instead of the original black cat that has been used mostly in the past.

American Horror Story: Coven is going to be quite the interesting season for the show, if you’d like to watch it, it will premiere on the 9th of October at 10PM on FX.