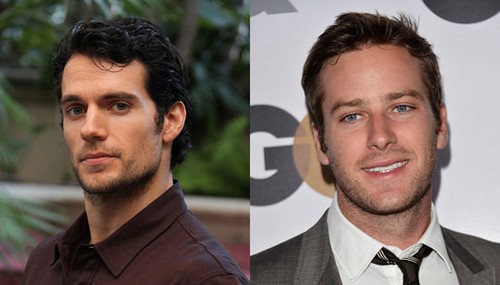 Henry Cavill and Armie Hammer play the male leads in the MAN From U.N.C.L.E. film reboot, with Alicia Vikander playing the female lead.

According to a new report from Star Magazine, Henry and Armie have apparently been ‘fighting’ on the set. Star’s sources explain, “Henry and Armie barely talk on set — and when they do, it’s not pretty.Henry considers himself a highly trained thespian and believes that Armie is only interested in making popcorn movies and being famous.”

The souce also adds, “Armie had one too many party nights with Johnny Depp, and he’s been on a crazy caviar diet to slim down. But Henry makes snide comments if Armie struggles during a physical scene. Once, Armie nearly lost it, but Henry just rolled his eyes, telling him to stop wasting the director’s time.”

If this was true, it wouldn’t be the first time Hollywood stars were locked in an ego battle on a film set – but because it’s Henry Cavill, I don’t believe it. Henry has one of the best reputations in Hollywood for being incredibly polite and genuine, even with difficult people. And this article makes it seem as though Henry’s the one causing all the problems, which is highly unlikely.