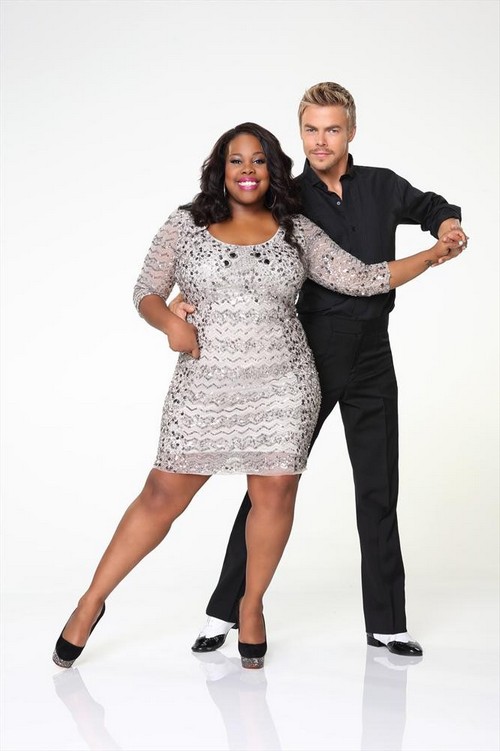 The glitz and the glamour is almost ready to head back to the ballroom for another season of DANCING WITH THE STARS. ABC released the names of the cast for season 17 of the ever popular dance show. One of the members of this season’s cast is reality star, Amber Riley. Amber will be paired with professional dancer Derek Hough.

If you don’t know who Amber is we have a bio below so you can familiarize yourself with her. Also check out her first official professional photos from this season with Derek Hough.

Amber Riley, best known for her role as Mercedes Jones on FOX’s Golden Globe, Peabody and SAG Award-winning musical comedy, “Glee,” got her first big break when Ryan Murphy cast her in the pilot “St. Sass.” Although the pilot was not picked up to series, Riley was able to use that experience to land a role on the television series “Cedric the Entertainer Presents.” She has performed in numerous theater productions, including “Alice in Wonderland,” “A Midsummer Night’s Dream,” “Into the Woods” and “Mystery on the Docks” with the Los Angeles Opera. In November 2012, Riley made her New York stage debut to rave reviews in New York City Center’s “Duke Ellington’s Cotton Club Parade.” She has received two individual NAACP Image Award nominations for Outstanding Supporting Actress in a Comedy series for her work on “Glee.” In 2011 she was nominated for a second Teen Choice Award for Choice TV: Female Scene Stealer, and in 2010 received the Most Popular Geek Award at AOL’s 1st Annual Geek Awards. Riley previously served as an Ambassador for VH-1’s Save the Music Foundation and as a member of Seventeen Magazine’s Body Peace Council. She is currently in the studio working on her debut solo album.

What do you think of Bill’s casting? Do you think she has what it takes to win the mirror ball trophy? Hit the comments and let us know what you think!