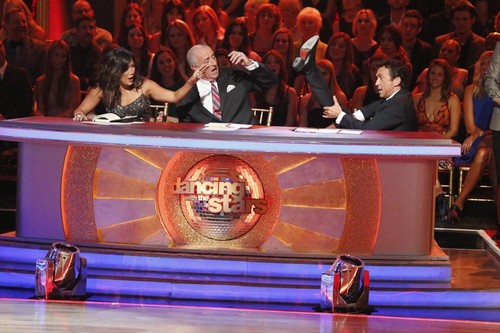 Last week the glitz and the glamour returned to the ballroom when Dancing With The Stars Season 17 returned with a whole new cast.  If you missed last week’s show we have all the videos for your enjoyment you can take a look and see how everyone did.  [CLICK HERE]

After last week’s performances at the top of the leaderboard is Amber Riley & her professional dancing partner Derek Hough who danced the Cha Cha Cha and was scored a 27/30.  Carrie Anne gushed about her dance and said,  “I love you, I love you.  You turned that Cha Cha Cha into a dance.”

At the bottom of the leaderboard was Bill Nye & his professional partner Tyne Stecklein who danced the Cha Cha Cha.  Although the crowd loved Bill the judges were disappointed and only scored them a 14/30.

On Monday September 23rd the competition heats up with all-new celebrity performances and one couple faces the first dramatic elimination.  This week should be challenging for the contestants because it is a Latin-themed week.  Each couple will be required to perform a Samba, Jive, Rumba or Paso.  We will have the dance assignments this weekend, but you know anyone who gets a Paso is not going to have an easy time of it.

We will also have our first elimination which will be determined by combining the judges’ scores from the first two weeks with the public votes from premiere night.

The show will open with a show-stopping opening number choreographed by Sharna Burgees and Henry Byalikov.