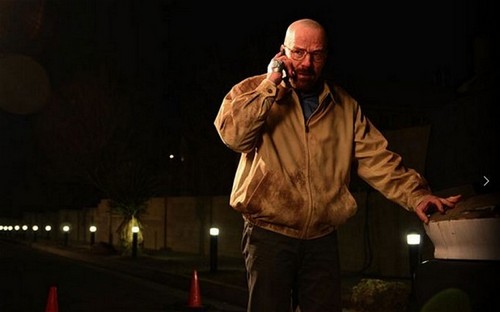 On last night’s episode 14 the penultimate episode of Breaking Bad starts with a guy driving up to a vacuum store in a red van. He pulls up in the back of it gets out takes a key out of his pocket and looks around before unlocking the door. Saul gets out of the red van with his luggage. Saul goes in and they proceed to take his picture and give him a new identity with a new life in Nebraska. Saul is told that he will need to hide out at the vacuum shop for three days until the guy can get his situation in order,and that he will have a bunk mate. Saul knows who his bunk mate is. Saul ask the guy how he is holding up, the guy tells him to be the judge. Saul looks in a TV that monitors the bunk, he sees Walter pacing and in a minute he throws something up in the air.

Marie is in a car with some D.E.A agents, one of them tells her that they will find Hank. They pull up to her house and they see that it has been broken into. Two of the agents jump out of the car and one yells for the driver to call it in and get her out of there. The car speeds off with Marie looking out the window. They go in and search the place but don’t find anything.Over at Jack and Todd’s they are watching Jesse’s taped confession. They are none to pleased when they hear Jesse tell the story of how Todd killed the kid on the bike that one time. (It’s all fun and games till you get caught with your gun up). Jack is heading out to kill Jesse when Todd tells him that he thinks they need a few more cooks under their belts. Jack seems to think they have plenty of money (what with taking Walter’s barrels of cash, they are clearly on easy street). Todd tells Jack that the meth can make them millions and he doesn’t understand how Jack can turn his back on that. Jack grins, says son of a b**tch and accuses Todd of being sweet on Lydia ( took him long enough).
Jack puts his arm over Todd’s shoulders and tells him they will go in and watch some more of that crybaby rat.

The crybaby rat (a.k.a Jesse) is sitting in his ground bunker. His face is really f**ked up. Jesse is looking at picture of Andrea and Brock. Jesse takes the paperclip off of the picture, takes the paperclip apart and starts trying to open his handcuffs with it.

Back at the vacuum store Saul is sitting on a cot watching Walter write. Walter hands Saul a piece of paper and a pen and ask him to give him the Names of five mercenaries. Saul knows he is going to hate himself but he still ask who Walter wants the hit on. Walter tells him Jack, because he killed Hank. Saul tries to talk some sense into him to no avail. Walter will not listen to reason. Saul keeps making some valid points. Like the one where Walt needs to stay and face the music. Walter a seems thinks killing Jack is the best way to go and that’s that. The man comes in and tells Saul he is off for Nebraska . Walter insist Saul is staying with him. Saul tells Walter the fun is over. Walter makes a attempt at getting all up in his face and being menacing but his coughing fit brings that to a screeching halt. Saul watches him sit there and cough like the dying man he is and then tells him one last time that it’s over before he walks out the door and leaves. Walter sits on the bed trying to catch his breath.

Skyler is sitting in a office meeting room with a bunch of other men.(I’m going to assume they are yes men since that is the only word Skyler says to them). They are talking but she is completely zoned out. Finally she focuses up and tells the men she can’t give them what they want because she doesn’t know where Walter is. They suggest she go home and think about it and at the very least come up with something useful.

There is a car sitting outside Skylers house keeping a eye on her. She is watching out the window while smoking and drinking something on the rocks. Skyler hears Holly crying and gets up to check on her. She walks in her room and sees three men standing in her room wearing a lot of black and mask to top it off. (So what are the cops out front for again? ) One of them is Todd, he ask if her son is home and she tells him no. Todd tells her that they have respect for her husband and they they know she has been talking with the police, he says he understands that she has to do that, but that she better not say anything about a dark haired woman that came into the car wash (Lydia). Skyler tells him that she won’t. (Good thing she didn’t cross her heart and hope to die, then again on this show that probably wouldn’t make a bit of difference). Todd ask her if she is going to run and tell the police in the front that they were there. Skyler tells him she has no intention of doing that. Todd believes her and the three of them leave. Skyler picks up Holly and holds her close.

Todd is sitting in a coffee shop the next day. Lydia comes in and sits at the table directly behind him. Todd tells her that he talked to Skyler and she promised she wasn’t going to say anything. Lydia tells him she is not comfortable with what is going on and she is out for a bit. Todd tells her that the meth is at 92%!and blue like before. Lydia ask how and Todd tells her they have Jesse. Lydia is pondering the 92%.

Walter gets out of a propane tank, the ground is covered in snow. We soon find out he is in New Hampshire out by a cabin in the middle of nowhere. Walter and the man (and Walter’s barrel) all go inside the cabin. The man starts describing on all the perks of his cabin ( there are none). The man tells Walter he has a enough food to last a month. The man tells him that normally he would have parted ways with his client but he can’t because Walter is well Walter…..lol. The man also tells Walter that if he gets caught he will not be coming back to help him. Walter opens the door and shows him out. The man gets in his truck and leaves. Walter goes back in the house stuffs his jacket pockets full of cash and heads out. Walter walks down to the gate when he gets there he decides that whatever he needed to do could wait till tomorrow (lazy).

Jesse breaks free and makes a run for it. Jesse starts screaming at them to kill him.

Todd walks to Andreas house and rings the doorbell. Todd gets her out of the house under the false pretense that he is friends with Jesse (although in Todd’s warped mind he may actually believe that). Todd puts a gun to the back of her head and tells her it’s not anything personal and shoots her. Jesse is in the truck bound and gagged and he breaks down when he sees her get shot. Jack tells him to settle down after all there is still the matter of the kid ( talk about a thinly veiled threat). Jesse stops screaming but he is still crying.

Walter is standing outside by his fence waiting for someone. When he sees them coming he waves for them. Walter now has a beard and a head full of hair so obviously time has passed. Walter opens the fence and they drive in. Walter is getting chemo right there in his cabin. Walter finds out that Skyler is using her maiden name again. Walter ask the guy to stay while he is having his treatment. At first he doesn’t want too but he quickly changes his mind when Walter offers him ten grand. They play cards. Walter tells him he will come up there one day and he will be dead. Walter ask the man if he can make sure his family gets the money. The man ask Walter if he would believe him if he said yes. It’s clear from the look on his face that Walter would not. That night while laying in bed his wedding ring falls off ( he has lost so much weight) he gets a string puts the ring on it and ties it around his neck. ( and it’s at this moment that I feel sorry for this character for the first and only time). Walter empties a box of insure and starts filling it with money from the barrel. Walter leaves the cabin and starts walking down the hill with the box full of money wrapped in brown paper.

Junior is in class and he gets called to the principals office. The secretary tells him his Aunt Marie is on the phone. Junior says hello and on the other end of the phone is just a woman who did a favor for Walter. Walter tries to have a father son moment with Junior. Junior is having non of that he tells Walter what he is, where he can go, and what he can do when he gets there, and then hangs up on him. Walter is in shock. So much in fact that he pulls tonight’s top dumbass move and calls the D.E.A.. Walter regains his wits and hangs up the phone. Walter sits down at the bar and watches a news show that is talking all about him. Walter is not pleased with what the people who are being interviewed or saying and gets extremely pissed off. However before he can do anything about it the Feds decide to drop in, guns and all (told you it was a dumbass move). But before they can even read Walter the riot act he has vanished into thin air with his box. All that’s left is his drink on the counter.