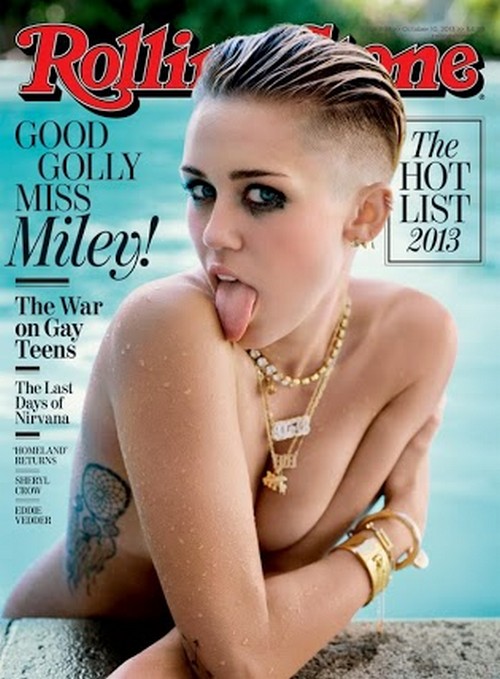 Lately Miley Cyrus has been doing many stupid things along with trying too hard to be sexy, today she’s on the cover of Rolling Stone magazine and it’s horrible.  On the cover you see Miley leaning over in a pool naked, covering up the essentials. There’s something about her that’s been making her look not so sexy and it started ever since that VMA’s incident.

For those who don’t know, which I find hard to believe you don’t; Miley Cyrus was at the VMA’s and did a performance with Robin Thicke.  They both sang his song Blurred Lines and the entire time I felt embarrassed for poor Robin who had to be on stage for that whole thing.   Miley Cyrus was trying too hard to be sexy the entire time.  I felt totally sorry forMiley’s father Billy Ray Cyrus who had to see his daughter do something so stupid.

Miley Cyrus has been able to completely make sexy look very unsexy.  She has been failing at being sexy and it’s noticeable. Miley’s got to calm it down a bit; there’s no sex appeal in someone who’s trying too hard, don’t get me wrong she has potential but she’s completely wasting it.