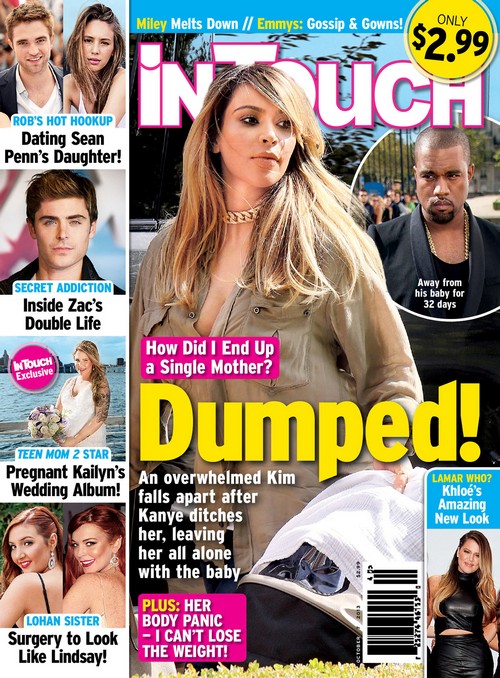 Was Kim Kardashian dumped by Kanye West? I do believe she was. At least that what’s circulating on this week’s cover of In Touch Magazine.

To be fair there could be a whole table of reasons why Kanye would dump her and none of it could deal with her issues but that’s not what we’re hoping for so let’s not pretend. We all watched as Kim over the years ran after after one guy or another until she hit the jackpot with a crazy pot. Is there any wonder why this relationship couldn’t work out.

Even before her pregnancy no one thought these two could make it. And instead of their daughter, North West’s arrival helping to negate the rumors, that little baby helped fueled them. Because she was young and born premature, any considerate father would be there for the upheaval of the first two months, if nothing else. But that’s not what Kanye was doing.

No he was assaulting photographers and traveling the world when he wasn’t on tour yet. Basically he ditches them at any opportunity. Despite that gushing he was doing on Kris Jenner’s talk show, Kanye will use this baby for publicity. He doesn’t have it in him to put others before him and his career. The same could be said about Kim. Well prior to her having North, after she became a dedicated mother (cough).

Maybe that’s why Kanye dumped her, she got to boring.