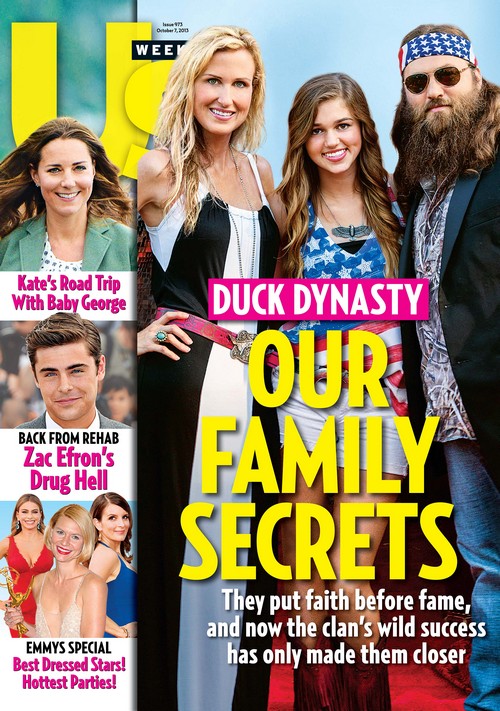 The current issue of Us Magazine features the cover story, “Duck Dynasty – Family Secrets.”  This week’s issue dishes on how the Duck Dynasty clan.  The down to earth and adorable family we’ve all come to love has gone Hollywood. Not the annoying celebrity type where you have to be sober around them or else you’ll start a fight. No, The Robertson family hasn’t gone that far yet but I fear it’s just around the corner.

The prestigious southern family that made red neck look endearing is gracing another cover. I say it that way because I’ve been seeing them a lot. They were on E! news and they’ll be guest starring on “Last Man Standing”.  I do love this family but I know that their high ratings could begin to go to their head.  The Kardashian family didn’t start off that annoying. They became it after they reached the pinnacle of success. The same pinnacle the Robertsons are quickly approaching.

Although that’s not what they’re claiming. In a new interview for Us Weekly, the family goes on to say that they have become closer with their success. This happened for them when they put family and faith before anything else.

Deep down I want to believe them, but I know it will get out of hand.  It always does with these reality families. There is too much proof. Proof that fame inflates egos and drives away family values. Sure I love watching the train wreck but I won’t this time.