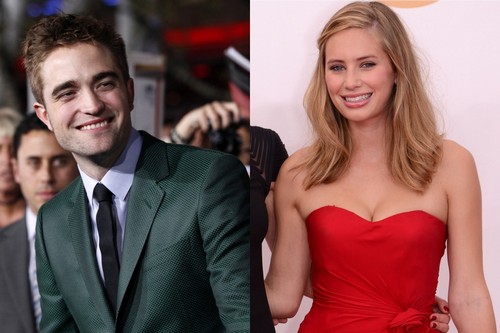 So just four months after breaking up with his Twilight co-star and long-term girlfriend Kristen Stewart, Robert Pattinson has officially moved on. While there were plenty of rumors about him dating his personal trainer, Sydney Liebes, as well as Riley Keough, People Magazine is confirming Rob’s relationship with Dylan Penn, daughter of Sean Penn and Robin Wright.

A source told People, “They’ve been dating a month or two. He’s crazy about her.” Keep in mind, if this is coming from People, it’s coming from a legitimate source and Rob’s reps probably ok’d it. Well, Rob doesn’t have a publicist so either his manager or agent ok’d it. Dylan, on the other hand, seems to shy away from the Hollywood scene, so it’s not hard to see what Rob saw in her. She’s obviously extremely good looking, but he might have found a kindred spirit in his attitude towards Hollywood, and if People’s source is right, he’s ‘crazy’ about her.

Poor Kristen. This is probably not the best news she’s ever going to get, considering it’s only been a few months since their breakup. Kristen hasn’t even been linked to anyone legitimate apart from her Camp X-Ray co-star, and she’s obviously having a difficult time getting over Rob.

What do you guys think about Rob dating Dylan? Let us know your thoughts in the comments.