Robin Williams Took A Trip To a Sex Shop As Mrs. Doubtfire (VIDEO) 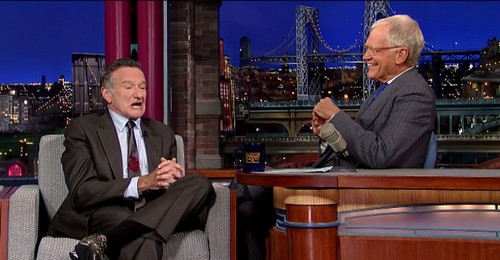 This year is the 20th Anniversary of Mrs. Doubtfire, as a gift to all of us who’ve seen the movie Robin Williams decided to share a story for us all that we’ve never heard till now. Mrs. Doubtfire is a comedy movie that stars Robin Williams and it’s known by many people, it won an Academy Award for Best Makeup.

Robin Williams was recently on the Late Night with David Letterman and during it, Robin shared with David, the audience and those who were watching at home about how during filming Mrs. Doubtfire; during a break he went out to take the makeover for a spin and decided to test it in a sex shop in San Francisco.

This wasn’t you’re walk in, stay for a couple of minutes test run; Robin Williams decided to go up to the person who was working there  and asked for their help with one of their items. Robin Williams is a man with no shame and is an even more awesome comedian, there seriously needs to be more people like him.

Robin Williams Will Could Easily Turn Into A Courtroom Battle

10 Comments
Leave A Reply
Cancel Reply
For All The Alaskan Bush People News!