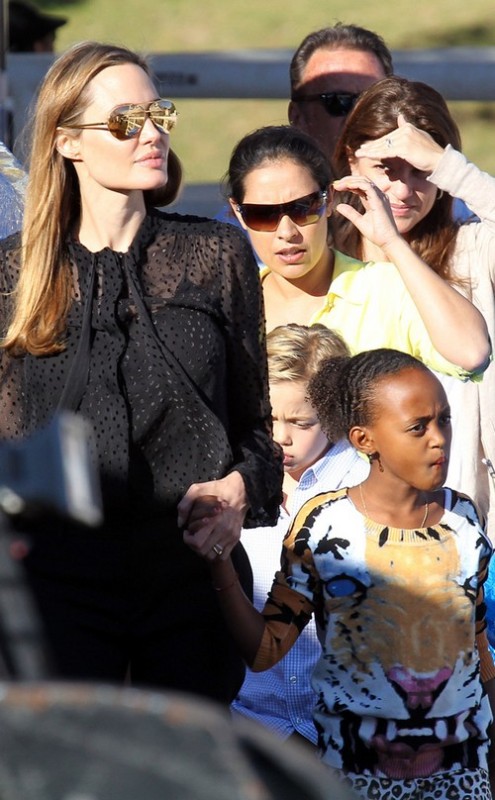 Has Angelina Jolie gotten secretly married? According to reports, Angelina was spotted with a new ‘wedding ring’ while shopping in Australia last weekend, where she’s currently in preparation for filming her new film Unbroken. Because the ring is new, it has sparked rumors that Angelina and Brad Pitt have already gotten secretly married, deriving the world the pleasure of seeing anything in the tabloids or news.

Angelina had been wearing a simple gold ring on her left ring finger for the past year, and we know that it used to belong to Brad’s great-grandmother. It was reportedly acting as a stand-in for the expensive and very fancy wedding ring Brad gave her last year when they first got engaged.

So now that she’s sporting a new ring, could it be that they’ve just decided to jump the gun and get married? Honestly, it would probably be a great idea to go through a shotgun wedding, considering the tabloid and media interest in their wedding. If they set a date and ‘plan’ it, the likelihood is that someone will leak the details – most likely from wherever they decide to plan it. However, if they decide to get married on a whim and just have close friends and family present for the ceremony, then they won’t have to deal with preparations or trying to preserve their privacy.

However, I don’t think Angelina and Brad are married – and you know why? Because they’re too strategic to act on such a whim. They’re saving their wedding for something special, mark my words. Maybe Angelina’s Best Director Oscar nomination for Unbroken, or maybe Brad’s next producing venture.