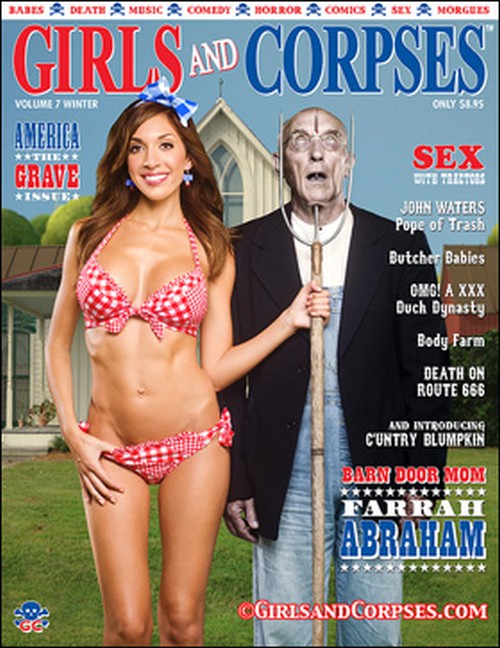 I have to be honest, this is the first time I’ve ever heard of Girls and Corpses Magazine. And then when I researched it, I felt like I was going to throw up a little. It turns out the magazine is literally Girls standing next to corpses.

The owner of the magazine claims that it’s because he wants to juxtapose the ‘healthy, wholesome‘ image of a beautiful woman alongside that of corpses. Um.. ok.

He also adds that he’s not against necrophilia, which this magazine seems to be semi-promoting. In the latest issue, everyone’s favorite [not] Teen Mom Farrah Abraham poses on the cover, next to a particularly undead zombie corpse. There isn’t much on the cover to indicate what type of interview or feature there is on her inside the pages, but the caption reads, ‘Farrah Abraham: Barn Door Mom’. Geesh, can you imagine being known by ‘barn door mom’? Well, Farrah probably loves the attention.

Anyway, I think this is a commentary on how low Farrah’s image has managed to sink. Just a few months ago, Farrah was being rumored to be covering Playboy and Maxim Magazine [as if!], but it turns out Maxim actually has standards. Anyway, now Farrah’s ended up on the cover of Girls and Corpses – and no disrespect to any of the regular readers of Girls and Corpses, but this is worse than Guys and Dolls. Well, Farrah’s got to pay the bills somehow, right?

What do you guys think of Farrah Abraham posing on the cover of Girls and Corpses Magazine? Let us know in the comments.