Justin Bieber Continues Acting Like An Ass, Makes His Bodyguards Carry Him On Their Shoulders In China 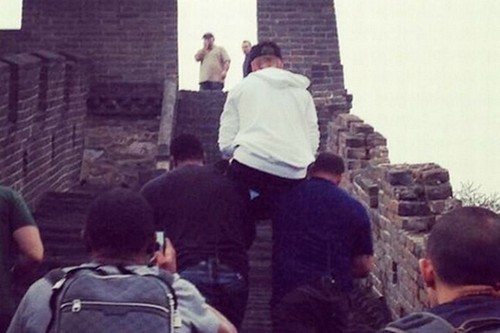 Justin Bieber never ceases to amaze. After acting like an idiot for the better part of two years, he had  managed to stay out of the headlines for a whopping two weeks. Alas, the streak was not meant to last. According to several new images that have found their way to Twitter, Justin made his bodyguards carry him on their shoulders while on the Great Wall of China.

Even Justin’s fans seemed to be surprised by his asshole-ness, with several tweeting messages like, “I still can’t get over the fact that Justin made his bodyguards carry him to the top o [sic] the great wall of China,” and, “Justin, dude, u actually asked people to carry you? Someone’s going a little diva I see.”

‘Going’ a little diva? Please, he went full diva a long time ago. I wouldn’t be surprised to hear that while Justin made them carry him, he also made them sing a song declaring him the king. That’s how immature he is, and that’s how childish his behavior has become. You know, there’s a famous saying regarding celebrities – your emotional growth gets stunted at the age you become famous. In Beiber’s case, that would be around 15 years old. And then when you think about it, his behavior’s not so surprising.

What do you guys think about Justin’s actions? Let us know in the comments.