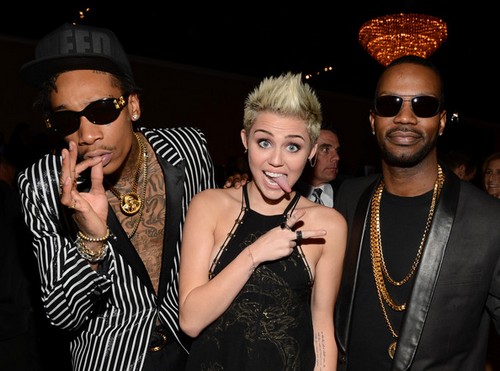 Is Miley Cyrus actually happy about the pregnancy rumors? Earlier today, there were reports circulating about how Miley was pregnant with rapper Juicy J‘s child. While most people dismissed it as ridiculous, Miley doesn’t seem to mind.

A source told Hollywood Life that Miley is ‘embracing the rumors‘, following the mantra that there’s no such thing as bad publicity. The source adds, “She is not worried about the rumors and will definitely allow them to continue as it gets her name out and she has an album to sell. So, no news is bad news!”

There’s also a high chance that Miley is hoping Liam Hemsworth sees these rumors, and gets jealous. And if that’s the case, can you blame her? Liam’s already been hooking up with another girl, just days after they announced their breakup. It would hurt anybody, and Miley seems to be in a particularly broken down state right now. I’m sure she’s hoping that all of her very public antics get back to Liam, and she probably thinks that she can prove that she’s having a blast without him by everything she’s been doing lately. Alas, I don’t think Liam’s going to react. For one, he’s busy filming Mockingjay in Atlanta. For two, he’s definitely put the relationship behind him, whether Miley likes it or not.