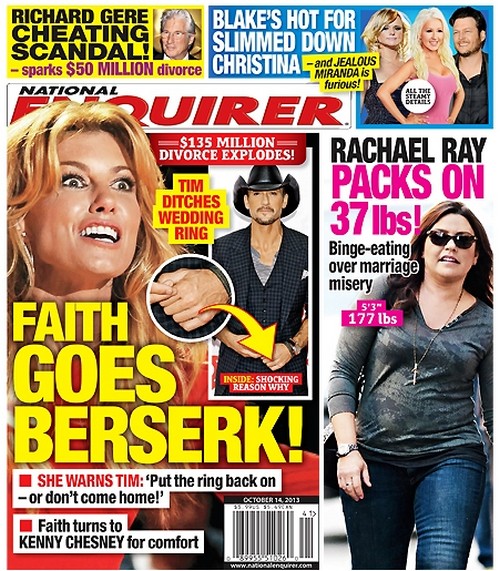 According to the latest cover issue from The National Enquirer, Faith Hill and Tim McGraw are not having a great time with their marriage. The report alleges that when Tim ditched his wedding band in public, Faith started threatening him with a possibly $135 million divorce. Phew, that’s a lot of money.

The report claims that Faith went ‘berserk‘ with anger, and she’s actually warned Tim: ‘Put the ring back on – or don’t come home!’ Then, the report also alleges that Faith has turned to good friend Kenny Chesney for comfort in dealing with her screwed up marriage, and there’s a hint that there might be something more than just ‘friendship‘ there.

In addition to the report about Faith Hill and Tim McGraw, there’s also a report on how Rachael Ray is ‘packing on the pounds’ by binge eating over her marriage troubles. The report alleges that she’s put on over 37 pounds in the space of a very short time, and she’s supposedly 177 pounds at 5’3”. Wow, way to body shame, National Enquirer!

Finally, there’s an alleged story on Richard Gere‘s supposed cheating scandal that may have ‘sparked’ a $50 million divorce. Um, have these people met Richard Gere? That guy wouldn’t be able to keep it in his pants if it was the last thing he had to do. And of course, where would we be without a story about the Voice judges? NE claims that Blake Shelton is ‘hot‘ for a slimmed down Christina Aguilera, and how Miranda Lambert is ‘furious‘ and ‘jealous’ about it. Well, Blake Shelton cheating rumors are nothing new, so keep them coming.

What do you guys think about Faith and Tim’s imploding marriage? Usually, I wouldn’t believe the tabloids about this, but there has been so many rumors surrounding Tim and Faith’s marriage that it’s hard not to believe that there’s something going on.