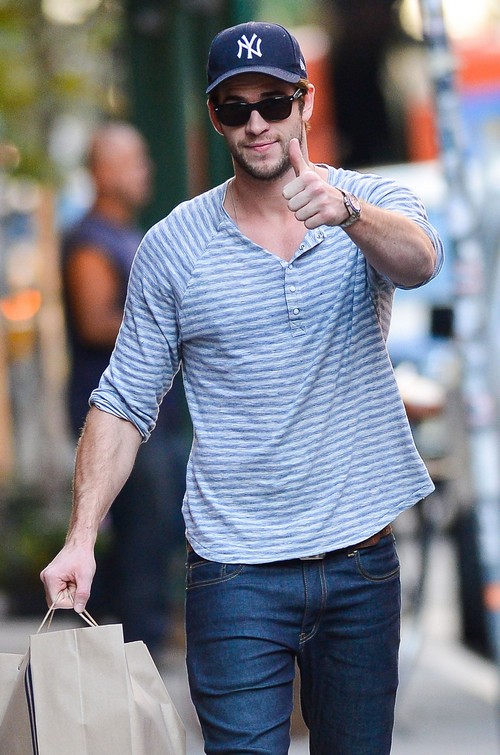 Is Liam Hemsworth already moving on from his rumored beau, Mexican singer and actress Eiza Gonzalez? It was barely a day before Liam’s separation from Miley Cyrus was officially announced before he was spotted making out with Eiza. However, several new reports allege that Liam spent an entire evening chatting up two random girls at a bar in New York City, racking up a $3,800 tab.

This article originates from People.com, so I doubt that they would be making it up. One explanation could be that Liam knew his image might take a hit if he was seen in another relationship so quickly after Miley’s break up, so his team decided to put this report out. Or it could be true, and he could just be a normal 20-something year old having fun with friends. But the fact that he was spotted with Eiza more than once, and then seen again at her place, says that something’s going on – if it’s casual, good for them. But if it’s not, then Liam seems to have serial cheating syndrome, doesn’t he?

He’s allegedly cheated on Miley Cyrus with January Jones and goodness knows who else, and now he’s being linked to two women at a bar. Even if he didn’t do anything, he certainly spent a lot of time chatting them up – so does he just have a wandering eye? I don’t know.

Get your shit together Liam, you’re living in the spotlight now. Stop sending mixed signals through the media, and decide whether you want your image to be that of a playboy or a relationship man. You can’t have it both ways – this is Hollywood.